The project VIF (Vienna Improv Fusion) used one of the most humorous, creative and spontaneous forms of performing arts; comedy improv to bring people of different social and ethnic backgrounds together.

The successful performances demonstrated the transforming power of culture, with the stage being an ideal location to allow people to “strive for higher motives and emerge from oneself”.

According to the well-known innovator in experimental theatre Grotowski: “Creation is a kind of confession, a method by which one discovered and unveiled oneself.”

The aim of the project took some of Grotowski’s principles and used drama and improv as a platform of integration by training young people to make the Viennese audience laugh out loud. 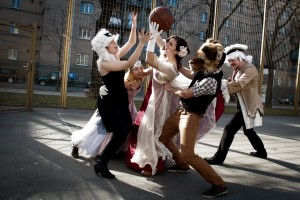 Although Vienna has been a multicultural city since the early modern age, the challenges of social integration remain the same. Today, the confetti nature of society makes finding ones niche in a city a challenge for new arrivals.

A major issue with newly arrived migrants is the social isolation and perceived inaccessibility to a common compatible culture. The project was supported by the Vienna city council, the ministry of culture and the IKU, an organisation that uses performing arts as an impulse for the renewal of social and structural process.

The venture aimed to address this gap by bringing talented young people from different ethnic and social backgrounds together through creative cultural commitments. 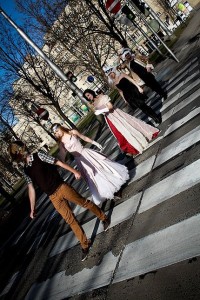 Auditions began in September 2011 at many educational establishments with the aim of attracting the widest possible participation. This included having a quota of performers who were not born in Vienna. Professional actors were used to train and support creative young talent in monthly weekend workshops that ran from January. According to Georg Schubert, one of the project’s initiators and a long-time professional actor at the TAG: ‘Discussing integration is rarely enough. Activities of a sporting or creative nature are equally important to bring people of different social, ethnic and religious backgrounds together. This bridge-building function will help young people link up at an important time in their lives’. Georg’s views on theatre echo a progressive view that culture needs to be: ‘socially engaged, as it the power to change things, even if it makes one person think.’

Drawing its origins to the Renaissance Commedia dell’arte, comedy improv uses humour to improvise, universalise and lighten the burden of everyday events. Although seemingly spontaneous and bereft of props, improv requires the performer to be a writer, director, play writer and actor all in one. This requires the development of social skills such as listening attentively, being tolerant of mistakes (often by laughing at them together) and being patient yet unrestricted and uninhibited.

The latter is significantly different from everyday life which means that all personality types can find their niche on the stage, personalising their own talents whether it is through expressive body language, surreal ideas or visible dramatic changes of emotions.

One of the aims of the €2966 project is to allow young people to use improvisation theatre as a means of social –self discovery. When asked about the difference between theatre and other forms of culture Georg replies with a revealing insight into the power of performing: ‘Theatre is unique as it is the most communicative of all the arts’.

VIF performed in an improvisation concept known as theatre sport where drama and sport are linked together which allows the audience to rate each performing team through the loudness of their applause. Theatre sport works by having a three man team consisting of an opener, supporter and closer. All work together to capture the permanence of a moment in an act of silliness. This allows different personality types to personalise their talents through different improvisation games where the aim is to create a humorous, spontaneous story with a large dose of unexpected yet heart-warming dramatic effect. The spontaneity and speed of the improvised humour establishes an intimate relationship between audience and actors.

Throughout the workshops and often outside it, the group worked together holding open and honest discussions about each other’s strengths and areas of improvement. The project worked successfully as it used a universal cultural medium as a platform of inter-cultural exchange which is conducive to the active nature of young people. Theatre is conducive to integration as it teaches the actors to communicate better, speak slowly yet clearly, with exaggeration frequently being seen as an asset. One of the key concepts in improv is that people are responsible for making each other look good. By encouraging people to act the role that they are given t, empathy, patience and camaraderie is generated. The close teamwork had a strong binding factor which was visible throughout the rehearsals, photo shootings and performances.

The audience participates through giving their suggestions on who, what and where should be performed on the stage. According to Helmuth, one of the improve coaches, what the audience wants to see on an improve stage is ‘happy, warm-hearted people who love to fail.’ By integrating themselves into an acts, improvisers are taking input from the audience. By making acting an experience that exists not for the public but vis-à-vis the public, the actors stay in contact with the audience and thus in contact with society. The nature of the audience means that every performance is uniquely pythonesque in their surreal stage story lines. This included a love affair row over a drowned tractor in rural Burgenland, a hyperactive and famished rat on an air-plane and a satirical song on Jerusalem.

The performances themselves were free, as culture is not a luxury, but a physical and spiritual necessity for any sane society. The group promoted the project by performing urban sketches similar to Trigger Happy TV in multicultural areas of Vienna like Reumannplatz, which can be seen on the following link:

The culmination of the performances was the last day when the VIF participants got the opportunity to perform together with professional actors on the stage. After the final act Georg announced that the group will stay together and will start to work on an improvised transformation of Büchner’s ‘Danton’s Death.’ In this way, people from diverse backgrounds will continue to be brought together through creativity, performance and a sense of humour.