Patch up a lovesick Spanish señor with Moliere’s’ Imaginary invalid’ and an ambivalent African-Austrian encounter and what do you get? Answer: Stück.werk, a patchwork of dramatic and lively performances that reveals our phoney social picture-puzzle. 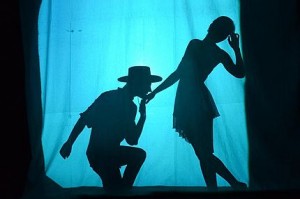 The latest in a string of successful plays at the atmospheric Theater am Weinberg in Lower Austria, the springy amateur dramatic group from Perchtoldsdorf has been entertaining a full house for some 16 years. In this short time, they have already performed German classics like Brecht and Büchner as well as also international works by Shakespeare, Ionesco and Woody Allen.

A transformation of a classic into contemporary settings is frequently attempted in today’s theatre. Stück.werk is more ambitious, taking several drama classics from different epochs such as Molière and Lorca and patching them together with notable Austrian writers such as Grillparzer, Alois Brandstetter and Kurt Bartsch. The result is a satire about contemporary society that gives answers from its director, questions from the actors and an opportunity for the audience to put in the last piece of the puzzle.

Initially lacking a common connective current, this creates intrigue and expectation for the audience, constantly keeping us on our toes with the consistent change that the play wants to explore. Change of epoch, change of stories, change of pace and even a change of leg. The constant see-saw between past and present is suggested in the setting itself. Stück.werk was performed within the realms of the historic medieval Perchtoldsdorf castle. The wing of the castle is beautifully restored into a stunning performance venue. The mix of old and new in the setting suggested the content of the play.

Through the different stories in different historical settings, the play reveals the puzzling and perplexing nature of life’s universal binary themes like love vs. death, youth vs. experience as well as emotions like status anxiety, expectations and disappointment. The wide berth of creativity, risk taking and experimentation is evident as the audience is treated to everything from shadow theatre versions of Lorca’s cavalliero, Don Perlimplin, (energetically performed by the bouncy Jonathan Achtsnit), an arranged marriage in the West to a man sawing his wife’s leg off in an act of jest.

The range of performing arts on the stage is impressive. This included a melange of different talents like singing, tango and playing various instruments. The play grew out of several different workshops organised by the director, Gertrude Tartarotti in 2011. Project Spielfreunde gave people who lacked experience the opportunity to discover their talents and create magic on the stage with more seasoned actors. One of the aims of the project itself seems to have been inclusiveness for all, a theme which the play itself tackles.

The socially critical element of the play is memourably illustrated with a patchwork of prejudices poem. This is followed immediately by Grillparzer’s much quoted ‘A praise of Austria’. The effect is subtly sardonic and the viewer is reminded of the hypocritical nature of how established, prosperous societies see themselves as looking back to a glorious past that probably only existed in the minds of isolated and impotent poets.

Tartarotti sees the stage as having a significant socially critical role, mentioning in the interval that: ‘To laugh at someone is to criticise them most effectively, for the object of laughter become ridiculous.’ On the role of the arts in society, the enthusiatic director responds affirmatively: ‘Theater must show what is wrong with society.There is always a message and we try to put on shows that have depth and are never superficial or shallow.’

This perplexing puzzle of stories comes together succesfully with both a spring and a sparkle in every step. The final scene has a rap performance (written by the jack-of-all trades Achtsnit) that is cunningly contrasted with the poetry of Grillpanzer, giving the audience a real taste of the constant dynamic between old and new, past and present in contemporary Austria. By the closing stages, the viewer is left with a satire of mankind’s inabililty to live up to his own and society’s expectations.
The grand finale offer the audience the opportunity to create alternative endings, suggesting that it is the responsibility of the public themselves to surmounting and overcoming life’s challenges, constant clichés and the perplexing persistency of puzzles. A worthwhile evening in a sublime setting organised by a multi-talented patchwork of possibilities.

Find out about future performaces at www.theater-am-weinberg.at/cm/index.php.