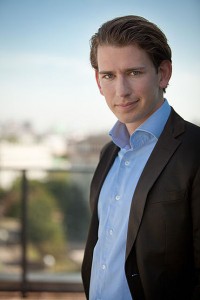 Integration Secretary Sebastian Kurz, 26, was at the ministry of interior affairs this week discussing with educationalists whether schools were failing in their mission of integration.

Kurz was preparing for today’s launch of Vienna’s second annual Integration week, which he described as ‘an integration offensive necessary in order to build consciousnesses.’

The youngest minister in Austria’s cabinet cut a dashing figure and spoke fluently without notes on how schools are tackling integration issues such as bilingualism, religion and diversity.

According to recent Eurostat figures, Austria is one of a few European countries alongside Luxembourg and Switzerland that has a double digit migrant population.

Going further, he stated how: ‘In the capital, the percentage of people of migrant stock rises to 39%. Vienna like many other European capitals has 150 languages spoken in its schools. At primary school level, one in two pupils is of a migration background, mostly from the Balkans and Turkey.

Under the motto, ‘Integration through achievement’, the question of language was a major theme as schools are frequently the last bastions of community in urban settings. Some Viennese schools in districts like Brigitenau and Ottakring have a migrant intake that is over 80%.

According to some of the teachers present, language deficiency results in a significant number of semi-literate pupils from migrant backgrounds. During the crucial developmental phase ‘they have neither mastered their mother tongue or German’. Vienna, despite its famously high living standards and relative absence of social segregation visible in cities like Paris and London, does share many of the social issues related to the effects of migration.

What was not mentioned throughout the debate was the impact of a selective school system on migrant pupil educational achievement. By deciding for them at pre-teen level what school they must attend, children from migration backgrounds often end up in the less academic, non-selective Hauptschule. This hinders their educational opportunities in the long term as achievement and aspiration tend to be lower than in the more academic Gymnasiums. The minister stated that ‘Over 10 million euro is invested annually to tackle language deficiencies in primary school children’.

Although a member of the conservative ÖVP, Kurz distanced himself from the clichéd approaches of left and right, indicating perhaps that his role is a bi-partisan one as the issue of migration transcends both parties and borders.

From the beaches of Lampedusa in Italy to the new rural National Front constituencies in France, immigration and its corollary of integration is exponentially increasing as a public issue. Despite being asked about the comparisons between the Austrian capital and other European cities, the minister dodged questions relating to comparison to other European cities, suggesting that he lacks experience in an issue that is of European and worldwide significance.

After his lecture, Kurz answered questions, which included what he understood by integration. He described integration as: ‘positively living together’.

A recurring refrain was the question of ‘non-integrated Muslim migrants’, a complaint which anybody who has spent some time in Austria or Germany would be familiar with.

According to Kurz, ‘only 2-3 % of people with a Turkish background see themselves as Austrians, despite having lived here for decades’. The OVP minister stated that this was due to a: ‘strong influence from the country of origin which can create a conflict of interest’.

It appears that on the issue of migrants from Anatolia face the double challenge of language and religion. In an indirect attack on secularisation, Kurz quoted the German chancellor Angela Merkel on the religion issue saying that: ‘It is not too much Islam but too little Christianity’. With last year’s controversial best-seller by Thilo Sarrazin ‘Deutschland schafft sich ab’, this debate relating to integration of Muslim minorities has in the last few years increased in intensity.

What is striking about the issue of integration is not how controversial but how consistent it is. The questions of inclusion and integration were being asked by the Hapsburg Empire over a century ago. Despite populist fears, Austria, largely due to its Hapsburg legacy, has a tradition of multiculturalism. Kurz pointed out that Austria was the first European country to formally recognise Islam as a religion in 1912. Kaiser Franz Joseph’s birthday was celebrated in all Jewish households. Today, two linguistic minorities in Carinthia and Burgenland are constitutionally recognised by the 1955 constitution. Perhaps it is the very presence of the integration ministers, dramatic debates and inclusion initiatives like integration week that allows successful integration to take place.

The Vienna integration week starts today and goes on until the 9th of May. More details can be found on www.intergrationswoche.at