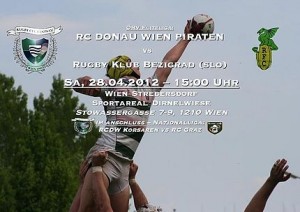 The Austrian reigning rugby champions, the Danube Pirates were sunk in Split by last year’s winners, RK Nada (Split-Croatia) by 8-68.

Since their historic quarter final win over the Hungarian Esztergomi Vitézek, the leading Austrian club had been training hard.

This included video-recording all of their matches for subsequent feedback sessions. The professional approach to the most important match in their short history meant that the Viennese club, who constitute the majority of the Austrian national team, travelled to Croatia with high hopes.

Having beaten teams from Serbia, Croatia, Hungary and Slovenia on their way to the semi-final of the most important regional competition, the team’s motivated amateurs hoped to make an impact with their first appearance in the last four.

Unfortunately for the visitors, their captain and experienced South African full-back Yvan Wever suffered a dislocated shoulder in the opening minutes of the game.

This proved to be a fateful omen for the visiting team who were on the back foot for the rest of the match. As it turned out, most of the game was played in the Pirates half, who were often caught napping on the counter-attack. Frequent overlaps meant that even if Nada did not score every time, it allowed them to dominate the game through making useful yards in their opponents half.
Although the Pirates dominated the scrums and line-outs throughout the game, in open play they were frequently outclassed by superior Croatian backs.

Strong defence by Nada in their own half, together with crisply created counter-attacks and constant pressure on the defence meant that the visitors were often punished for their handling errors. By half time, the Viennese club were forty points down to the competition favourites.

By now, the game was more about saving team pride rather than the match itself. Yet things proved to be no different in the second half, with poor handling once again letting down a side that were constantly outnumbered and outclassed by a sharp-looking and elegant Split side. This included a champagne try by the Split inside-centre, who ran from his own half, side stepping his way past three players to score a splendid try that buried the exhausted visitors. To their credit, the visitors did battle on, scoring a late try by Alexander Krauchenberg.

In spite of the substantial defeat, the place in the semi-final constitutes the most successful run for an Austrian team in the regional rugby competition. The transnational league, which involves teams from Croatia, Slovenia, Hungary and Serbia, is a historic highpoint for Austrian rugby.

The Danube coach Stiig Gabriel, commented that his team had ‘fought on valiantly throughout the match’. Up to the semi-final defeat, the Viennese team had not lost a match in the competition. According to scrum-half Michael Kerschbaumer: ‘The opportunity to reach this far in the competition is a useful experience for all in the club’.

This is indeed significant, when one remembers that rugby enjoys about as much popularity in the Alpine republic as handball does in the UK. The semi-final constituted the club’s greatest success in an international competition. The team has thus set a high bar for next season’s national and international competition. The Viennese club hopes to retain the title of Austrian champions this year, when the season starts again after the Easter break.
The Danube Pirates restart their campaign against RFC Bezigrad
28th April 2012- 1530 at Sportarena Dirnelwiese, Wien Strebensdorf, 7-9 Stowassergasse, 1210. Entry is free.

Watch highlights of the match on http://vimeo.com/39829401
Austrian Times