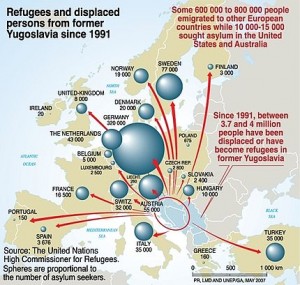 During the Yugoslav wars, some 55,000 refugees sought shelter in Austria. Today, twenty years on, a reconciliation project started in Salzburg is helping former foes come together. It hopes to reconcile war veterans of the previously hostile ethnic groups.

The project is headed by Belgrade-born Nenad Vukosavljević. The 44-year-old had refused to fight in the bloodiest war Europe had seen since 1945. His project has been targeting people from the borderland region between Bosnia, Croatia and Serbia. His aim as a peace activist is to attempt to reconcile the hostile ethnic groups.

Reconciliation involves war veterans from both sides telling their story. Like South Africa’s truth and reconciliation initiative, the participants must meet their former enemies face to face. Vukosavljević allows each veteran to recount their experiences and allows locals from the area to listen.

He describes these meetings as starting with: “People arriving with their prejudices and often ready to continue the war. Yet as the people hear others take responsibility for acts committed by their own, they are moved to think about their own side’s responsibilities in the conflict. Sometimes it appears impossible to overcome some hurdles. This only demonstrates the need for reconciliation.”

Indeed, the most important thing is to respect others’ sorrow. In the meantime, there have also been joint actions by the war veterans. They travel together to the places that suffered during the conflict. Vukosavljević continued to explain, “A very important step in the work with the veterans is to make them listen and respect the stories and sorrow of others.”

He describes the results further: “There have been many face to face encounters, where former enemies found out that they were in the same place at the same time. Sadly, bad things happened. People’s injuries often led to permanent disabilities. They still carry troubling memories. Yet I have also heard from some people that after an encounter, they were able to sleep soundly after many years. They find that they experienced, felt and continue to feel the same emotions – ruptured from society. For others, social reconciliation becomes a primary aim.”

Despite the reconciliation project, Vukosavljević is aware that this initiative with the war veterans is only a drop of hope in an ocean of despair for the thousands of people affected by the war and the deep mistrust that still reigns. Over 100,000 people perished in the Yugoslav wars, with several million being displaced.