Croatians have been organising balls in Austria ever since they were constitutionally recognised as a nation within the Habsburg monarchy in 1867-8.

The first official Croatian ball in Vienna in fact occurred only shortly after Burgenland voted to become part of Austria in the early 1920s.

That tradition is still strong today – and so last weekend on the night when many Croats were preparing join the EU, the Burgenland Croat ball (Kroatenball) was taking place in the 19th century Viennese, Italian Renaissance-style Kursalon in the city’s posh 1st district.

It was a tribute to tradition and a celebration of a culture that has thrived for centuries in Austria long before modern day Croatia was formed.

This homage to a complicated past and respect for a shared cultural heritage was evident in the conspicuous absence of the Croatian flag or any other form of national insignia. Instead, the Croatian community in Austria and beyond organised a ball that demonstrated a long-standing cultural consciousness and cordial co-operation within Central Europe. 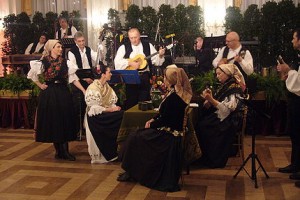 Under the motto of ‘Trialism is the future’ , the ball organisers choreographed an event that splendidly showed how separate Central European countries like Hungary, Croatia and Austria share a common cultural inheritance. Trialism, a concept once mooted by the beleaguered Hapsburg empire as a solution to its ethnic woes, seemed to be alive in the cultural expression of the Croatian community within the former Hapsburg lands.

The Burgenland Croats are a bridge in this trialistic equation. The evening programme, besides featuring a traditional Viennese ball programme, contained traditional wine-celebrating folklore from the Burgenland Croat community in Austria as well as neighbouring Hungary. The midnight performance featured a mighty hall-filling, apparently physically exhausting dance format known as the Molisian-Kvadrilla.

Although an enclave hundreds of kilometres away from their original homeland, they have managed to preserve culture and language for centuries, largely due to the historically rural nature of their communities. The Burgenland Croat community has been present in Austria and other parts of Central Europe since the early 16th century.

Like Quebecqouis French, Burgenland Croats speak the Croat that would have been spoken in the early-modern era. This dialect is mutually intelligible with standard Croatian. To a non-Burgenland Croatian, the language comes across as an attractive and singular mixture of rustic Dalmatian dialect, pronounced continental accent and frequent loan words from Hungarian or German such as  ‘lekvar” for marmelade or ‘Zug’ for train. Multilingual and constitutionally protected in todays Austria, the Burgenland Croats are a thriving community that today boast two government ministers, defence minister Darabos and environment minister Berackovic.

Numbering some 50,000, the Burgenland Croats take their name from Austria’s most Eastern province but are actually spread over Austria, Hungary and Slovakia, with other pockets in Italy and Romania. It was this historically dispersed nature that did not formally end until the fall of the Iron Curtain which gives the ball its significance, as it was the central event which generations of Croats from all parts of Central Europe would attend. A middle-aged man from the Hungarian side of Burgenland claims that: ‘During the Cold War, people from the other side of the Iron Curtain risked bombs, bullets and barbed wire to Walz in Vienna.’

The ball is a successful mix of folk Croatian, Austrian and Hungarian traditions. Organised by the Burgenland Croat journalist and writer Petar Tyran, the ball revels in the breadth of the Burgenland Croats borderland. In his bilingual book on the Croatian balls, Der Kroatenball in Wien, Tyran states that the ball is a: ‘Great gala, without which the start of the New Year is unimaginable’.

This was evident in the opening of the first performance. The words at the opening ceremony were spoken by Petar Mogyorosi. The vibrant young twenty something represents the Burgenland Croat diversity. Born in Hungary but living in the state capital of Eisenstadt or Željezno as Croats call it, he presented the evening entertainment programme in an impressive trilingual command of German, Hugarian and Burgenland Croat. He stated that the ball’s purpose was to: ‘Express the unity of the previously nationally divided Croatian community through song and dance.’ In the continuing spirit of Trialism, the ball was formally opened by Tibor and started with a Viennese Walz.

The ball featured a panorama into the folklore traditions of the different Croatian communities that have been settled outside Croatia for centuries and have managed to admirably preserve their language, traditions and Croat consciousness.

The Magyar folkloric ensemble participated in the same folkloric expression as the Burgenland Croatians. Playing the tamburica, a long-necked lute with frets, on which the strings are sounded with a rapid strumming motion using a plectrum known as a “trzalica”, the performance certainly strikes a chord with everyone present. Featuring wine, broomsticks and red flowers in hats, the atmosphere created is a jovial , dynamic and uplifting sound. This leads to an infectious sentiment of community spirit and a fond feeling favourable to the approaching spring in the snowy Viennese winter.

Like many balls, the Croatian ball is a place to be seen for networking and business purposes.The economic purposes of the ball were evident in the marketing of wine from all three countries in the Trialism equation. The international and public nature of the ball was evident in the attendance of various dignitaries and public figures such as Hungarian members of pariliament, Mexican ambassadors and Croatian state representatives. According to the Croatian ambassador to Austria, H.E. Gordan Barkota, the ball is:

The word bridge was on many people’s lips. Many young Burgenland Croats such as Filip Tyran, a twenty-six year old music student commented favourably on the ‘very special unity platform that shows how Croatian culture thrives’. Older Croats commented on the social nature of the ball:’I see people here from all parts and sectors of the Croatian community that I usually have not seen for the whole year.’ Lukas, a twenty something student involved in the Burgenland Croatian community mentioned that the ball was ‘lively and special and worthwhile’. Katherina, a trainee primary school teacher, noted how the ball was an ‘outstanding experience’.

The Kroatenball is a unique, uplifting and welcoming ball that will be attractive to all Europeans due to its careful cultivation of Central European culture in general and the celebration of Croatia’s cross-border culture in particular. Hundreds of kilometers away in Croatia, as its citizens ponder the fate of Croatia’s future in the EU, one thing seemed certain. The Burgenland Croats, a small minority, will continue to play their large role as a bridge between the different countries in Europe.