A new exhibition featuring caricatures by the renowned artist Jean Plantuerux (Plantu) opened recently at the French institute in Vienna.  Komisches Volk/ Drôle de peuple pokes fun at half a century of Franco-German friendship. Colourful, playful and razor-sharp, Plantu’s caricatures have been appearing in France’s leading broadsheet Le Monde for over three decades. Having learnt his art in the EU capital Brussels, Plantu explores the union’s problems by looking at Europe’s most famous couple.

The motor of European unity features with its various Teutonic and Gallic incarnations; De Gaulle and Adenauer, Mitterrand and Kohl and Merkel and Sarkozy. The exhibition humorously deals with many of the problems that the EU continues to face such as unemployment, the European constitution and the recent Euro zone crisis. Europeans pointing their fingers at southern fecklessness are reminded that as late as 1998, Germany had five million unemployed and a car manufacturing crisis.

Like all great artists, Plantu’s caricatures show a sense of continuity and timelessness. In a caricature titled ‘‘The Franco-German couple indissoluble for better or for worse’, a phlegmatic Margaret Thatcher stands detached from the bonded Franco-German couple who have been seduced by the chimneys of the Rhineland. This is in 1983 but in light of the British announcement of a referendum on the EU, it seems as relevant as ever. This being Europe, the past is still present, featuring closed European chapters such as the Berlin wall, the Euro missiles crisis and the Cold War, which may be difficult for those without a detailed knowledge of European diplomatic history to appreciate. 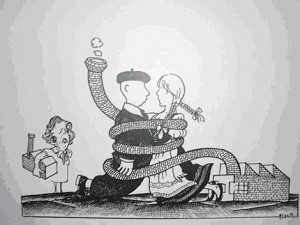 In the francophone world, comics and caricatures are considered the ninth art, dating back to the Bayeux Tapestry or even the prehistoric caves of Lascaux. Graphic novels, such as Tintin and Asterix known as bandes dessinée or BD testify to the reputation of being the ‘ninth art. One of the most insightful caricatures that pays tribute to the BD tradition shows France and Germany presented as the bungling, slapstick Thompson twins from the Brussels comic Tintin. 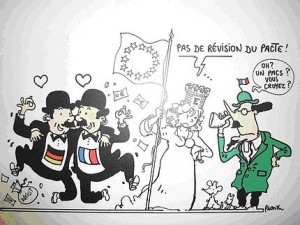 The caricature itself in French history has frequently taken the role of the court jester who has been sacked for going too far. In the early 1830s, Charles Philipon poked fun at the image of King Louis-Philippe by caricaturing the king as a pear. More recently, the French printed press have courageously continued this tradition through unabashed publishing of controversial Mohammed caricatures. If words fail liberty, the caricature guarantees it.

Like any couple, the Franco-German relationship had had its turbulent times which seem to stretch it to breaking point. The top-heavy relationship is another leitmotiv as we are reminded that the imbalance of Merkozy is nothing new and perhaps even takes its example from the forefathers of Europe. This is captured in a huge picture of Konrad Adenauer looking down at a pygmy figure of Charles de Gaulle. 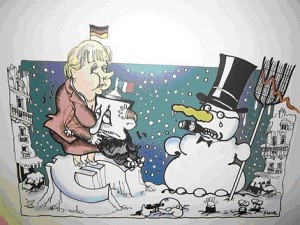 The knowledgeable and approachable French cultural attaché Jean-Claude Crespy commented that:  ‘Caricature have always been political, using a humoristic way of showing the buffoonery of the political class…the caricaturist does not look to hide difficulties, he seeks to reveal them.’ Indeed, Plantu, who published his first caricature at the time of the Vietnam War, has taken on the role of the boy exclaiming that the emperor has no clothes. Crespy revealingly notes that: ‘The artist does not possess the gift of the gab but rather of powerful pictures that show the lies of words.’

The effect of a caricature, which often has a sardonic caption underneath can skilfully capture hypocrisy and naivety. This play between words and pictures is accurately captured in a burning car being overshadowed by the Euro-missile crisis. A middle-class, sheltered and shocked adult is shown standing below two sets of missiles pointed at each other yet focusing on the gutted car with the comment ‘Where did the youth get their culture of violence from’?

More recent debt problems of the Euro zone are delightfully examined with an image of a London city worker relaxing as his institution goes bankrupt, secure in the knowledge that he will be bailed out by a hefty 37 billion. Another looks at the Greek debt crisis, which shows a sinking ship with a poor traditionally clad urchin Helene looking very lost among the priestly European public servants.

The incisive yet insightful exhibition means that Europhiles, Franco-German connoisseurs and fans of political satire will love it. Europeans will be embarrassed. The message in Vienna for crisis stricken Europe is twofold; ‘Let them draw caricatures’, for there is always hope if we can draw on humour.

The exhibition at the French cultural institute in Vienna runs until the 5th March. Entrance is free.