The Austrian rugby union team was soundly beaten by the BAGs (British army rugby Germany) over the weekend.

A good-natured friendly kicked off on a chilly day in provincial Wiener Neustadt that is also the home of the Austrian military academy. 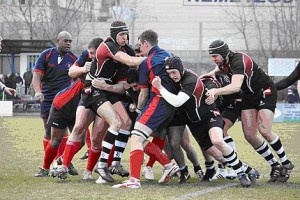 The British army were well-drilled after a whole season of play and marched into their last game of the season against a side whose hibernation during the winter break was exploited.

Nevertheless, the youthful Austrian team fought valiantly until the end, scoring a try in the dying minutes and again demonstrated its potential as a competitive regional side.

Few in the Bielefeld barracks would have even know that rugby existed in Austria.  Yet the hopeful hosts seemed not to have read the squadie script, opening the score sheet with a try from scrum-half Aslanyan.
This was duly converted by Martin Leidl. Was this the opening salvo of a famous victory? The conversion by Martin Leidl seemed to offer the minnow home team some hope of preventing an early barrage of tries.
Indeed, the visitors were held at bay until the 26th minute when they exploded like a dawn artillery battery. The British army, unbeaten this season, made holes into the Austrian defence with a series of loose kicks and mazy runs by its disciplined backs.
Afterwards, the Austrians attempted to capitalise on their relative parity in the pack. Yet the BAG held their fort together and launched constant counter-attacks with numerous loose kicks managing to avoid the muddy battles on a nippy, late-winter day.

Using their experience and size, the Tommys were repeatedly able to create overlaps. At half-time, the guests were in the lead with 34 points to 7. Austria stepped up a pace in the second half, showing its strength in its forwards, who were often more than a match for the oversized regimental players.

The Austrian national team (symbolised by the Goat) confirmed that it was not short of mountains to climb. Yet climbing mountains caused giddiness as the Goats it could find no answers to the slick passing, quirkily recycled balls and nifty set-ups of the visiting team.

The Austrian players are skilled, committed and talented but must have regretted their winter-break. Austria saved some honour with a consolation try in the 79th minute from Max Grubner.

The game ended with a large 53-15 win for the British team. The two squads were watched from the sidelines by the British Ambassador to Austria Susan le Jeune d’Allegeershecque and the ceremoniously dressed Wiener Neustadt mayor Bernhard Müller.

Apart from the politicians, the match attracted a partisan crowd, commentated vivaciously by the retired Austrian international Andreas Gaul, who remarked on some ‘extraordinary plays by the visitors’.

The British army, more than any other service, places a huge importance on the role of rugby at regimental levels. Rugby has been an established sport in the British Isles for almost a century and a half, while the first Austrian international rugby game took place in the early nineties.

The Brits boasted that their victory was a ‘stunning demolition’ yet it must be remembered that the Austrians made them battle on to the last moment.

Rugby is a minority sport in Austria. The first international game took place only in the early 90s with students making up the core of the national team.

Despite this, the genuine spirit of the oval game at club level is splendid and on any given weekend, one is often surprised by the intelligence of the set-pieces and clever plays demonstrated.

Many players follow the professional leagues in both hemispheres and state champions like the Danube Pirates in Vienna are keen to attract newcomers.

The Austrian flanker Johannes Dachler later noted that: ‘We were pretty evenly matched up front. But in terms of support amongst the backs, we were outplayed.’ He also added that ‘the army team is probably the hardest team that I have played against, up alongside Oxford University where we toured England just over a year ago’.

One of the British army coaches paid tribute to the strong backs in the Austrian team and mentioned that they would like to return their hosts hospitality through an invitation to the well-established services sevens circuit.

At a post-match interview, the Austrian team manager Jorg Berger claimed that:  ‘In defence the backs showed that they can take on physically superior players.

Indeed, some of our pack, although young, have a lot of potential at their disposal and are very keen. We have to analyse this game and work on our weaknesses’.

Find out if the Austrians are able to do better when they face the Hungarians on the 4th April next month at Hohe Warte in Vienna.