Hundreds of people had marched through Vienna on Saturday in support for the plight of the refugees freezing in the Votivkirche. 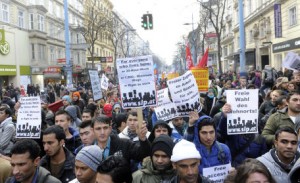 The refugees had sought shelter in the church near the university, having marched from the insalubrious Traiskirchen detention centre in November last year.

The demonstration was the culmination of a protest that has sought to highlight the plight of some sixty three people whose weekend protest brought about a personal letter from the federal president Heinz Fischer.

The sixty-three men include forty-eight Pakistanis, seven Afghans and eight North Africans. Their numerous demands centre primarily on better conditions for refugees but also include access to the work market, the right of asylum for economic refugees and the right to appeal against negative asylum decisions.

All the refugees come from regions where war, political instability and economic blight is persistent. Most are from the unstable borderland region between Pakistan and Afghanistan.

Khan Shajahan, from the refugee protest camp Vienna sees the latest developments as a positive sign, noting that: ‘We are glad that the Austrian president has addressed us with a personal letter. We see it as a sign that our concerns are being heard and will hopefully be taken seriously’. He praised those who have aided their cause, saying that: ‘The solidarity of civil society as well as encouragement from our friends and supporters has strengthened our resolve’.

Few people would associate Vienna with the new ‘wretched of the earth’. Its carefully cultivated reputation as the ‘Isle of the blessed’ compares favourably with the more gangrenous elements of the Parisian

Yet ‘Festung Europa’ , a prizewinning book by the Austrian journalist Corrina Milbourne reminds us that Austria is not immune. The book investigates the entry routes, jobs and situation of the refugees, immigrants and asylum seekers in Europe.

One of her chapters focuses on exposing the shocking conditions of the refugees kept at Traisenkirche detention centre where the Votivkirche refugees were originally accommodated. She shows how refugees in Austria end up in a legal no-man’s land, locked in a black hole of often Kafkaesque proportions.

Saturdays demonstration started at the Westbahnhof. A small stage was set up from where the refugees were able to talk about their case. A man from Africa stated: ‘I have been here for nine years and still have no papers.

I do not demand voting rights but I would like human rights.’ The up and coming and socially engaged rapper Kid Plex demonstrated his solidarity with the refugees by performing a moving song about the rights of humanity. Various civil rights groups spoke in their defence, appealing to people’s conscience with : ‘It is an accident of birth where you are born’.

The demonstration marched into the first district towards the Hofburg. Turning left into the Herrengasse, they stopped in front of the Ministry of home affairs. Speeches were held here by the refugees and their representatives from activists that have sprung up to represent them. Numerous activists who were also acting as translators to the refugees noted that: ‘No human being is illegal’.

For her part, the Austrian foreign minister Johanna Mikl-Leitner pointed out that: ‘Clearly, for men who are persecuted in their own country there will always be room in Austria. But leave to remain for everybody is not possible – that is an unrealistic demand.’

Indeed, even the Austrian foreign minister Michael Spindelleger recently declared on a trip to the region that ‘Afghanistan is still not a secure country’. With the longest war in US history still raging and showing little sight of abating, trying to return the people back to a place where they face clear and present danger makes little sense from a political as well as a moral perspective.

Yet during an economic crisis, fewer people will sympathise with the demands for asylum being granted on economic reasons. However, the same arguments were used in turning back the Jewish refugees abroad the MS St Louis, fleeing the Nazi regime in the 1930s. The result of this inhumane indifference at a time of economic crisis resulted hundreds of them perishing in concentration camps.